Logan curled her legs up under her butt and pulled the blanket over her body, glad she’d turned on the fireplace. It was nasty out; the wind was blowing the sleet and snow against her living room window. Oh, Santa’s going to have a tough time out there tonight!

She smiled when she realized that she was actually happy that her flight back home was canceled. She’d secretly wanted to spend Christmas alone this year, especially since her bitter breakup with that asshole. She pushed the thought away. “It’s about me tonight”, she said aloud. She was going to have a great Christmas without him. After all she had an absurdly over-sized roast in the oven and the apple pie she’d prepared from scratch was ready for baking. She reached for her snifter, took a sip of the generous amount of dark liquor she’d poured herself, and instantly felt the burn run through her. Logan closed her eyes and rested her head back on the couch, savouring the moment.

The high winds of the storm outside rattled the glass in the window, and Logan got up to look outside, just in time to see a pair of headlights slowly snaking down her street. She watched intently as the large vehicle slowed down and came to a halt. Oh dear. Someone’s stuck. She waited to see if there was any movement from the truck. A few seconds passed and its headlights went off as the driver’s side door opened. Her inquisitiveness took over and she continued to watch as a figure stepped out of the vehicle.

It was a man, a very tall man. He struggled to shut the door of the truck as the harsh winds of the blizzard blustered around him, while trying unsuccessfully to keep the scarf around his neck. She couldn’t make out his face, but her eyes stayed on him as he began walking up the street.

I hope he gets to his destination safely, she said to herself as she turned away from the window and headed into the kitchen.

The wind howled again, louder and this time the whole house seemed to shake. Her mind immediately went back to the man stranded outside in the cold. She removed her roast from the oven and just as she was replacing it with her apple pie, she heard a knock at her door.

When she answered the door, cracking it ever so slightly in an effort to keep the cold out, the force of the wind pushed it wide open, bringing a blast of cold air with it. Instinctively, she crossed her arms over her chest, her hands rubbing her arms, as she looked up into the face of the man she’d been watching through her window just moments before.

“Good evening ma’am. I’m terribly sorry to bother you on Christmas Eve but I’ve run into some trouble.”

He spoke with a slight drawl and she could have sworn she saw the corners of his full lips turn up slightly as he spoke. His complexion was dark, more than a few shades darker than her own caramel skin tones, and his eyes were light, almost hazel. In a word he was handsome, incredibly so. He was clad in a long black overcoat and a toque, with the scarf that she had seen him struggling with earlier still hanging loosely around his neck. She stood there dumbstruck and motionless for a few seconds before realizing that she was staring.

He looked down at his feet shyly. “I’m sorry. I don’t want to scare you or nothin’. I’m s’posed to meet some family about 30 miles from here but my truck didn’t make it and my cell is outta juice.”

“Well…uhhmm…come in,” she stammered, moving aside to make space for him in her tiny front hall. “It’s bitterly cold out there. I’ll let you use my phone.”

His arm brushed against hers as he tried to squeeze inside, and she felt her face flush. She closed the door and leaned her back against it, admiring the view of his back. Wow.

He turned to look at her and she felt a warmth exuding from him. His eyes trailed down her body to her ample hips and then back up to her face. He lingered at her mouth and again she noticed the beginnings of a smirk.

“I’m Logan,” she said, offering him her hand.

He removed his toque. “Pleasure to meet you ma’am. Name’s Tyler. Tyler Smith.” He took her hand in his and lifted it to his lips, his eyes meeting hers before he bowed his head to kiss it. Again, that warmth.

“It smells delicious in here,” he said, without releasing her hand.

“Well I just took my roast out of the oven, and put my apple pie in,” she replied, smiling.

He smiled back at her broadly, revealing a perfect set of pearly white teeth.

As she took in his smile, Logan felt a sense of peace and…something else she couldn’t put her finger on. Here she was standing in front of a beautiful stranger, who spoke with a drawl and had all the charm of a southern gentleman. The fireplace was casting a warm glow in the room, the wonderful scent of herbs and spices were wafting throughout the house and it was Christmas Eve. Maybe this will be a merry Christmas after all. She caught herself staring at him again and quickly said, “I’ll get my phone so you can call your family. Would you like to sit for a while and have a drink?” The words had escaped her lips before she’d even thought about asking them. 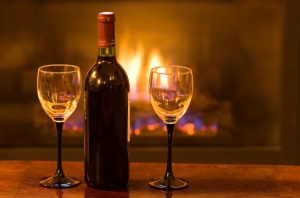 “That’s quite hospitable of you ma’am, but I don’t want to impose. So, I’ll just take that drink, make my call and then just wait for the tow truck in my car.”

Logan laughed. “Have you seen it out there? It’s freezing outside. I can’t let you wait in your car. You can wait as long as you have to in here, where it’s warm. In fact why don’t you stay and have dinner with me? My roast is more than big enough for two.” Damn. Did I really just ask this man to stay for dinner?

Tyler looked at her, as if trying to assess if she really meant what she had just said. “Well, Logan,” he spoke slowly, as he carefully removed his coat, “You’re in luck because where I come from they say you should never let a pretty lady have dinner alone…especially not on Christmas Eve.”

Logan grinned at him and took his coat. He followed her into the living room where she poured him some cognac. “There you go. Something to make you warm,” she said, handing him the glass. When he took the glass from her, his long fingers grazed hers, sending a shiver of yearning through her entire body.

“You know what, Logan? As delightful as I know this cognac is going to be, I don’t need it for warmth. The cold left my body the minute I saw your pretty face.”

Thank you, Santa! Logan smiled mischievously, as she picked up her glass and raised it to his. “Well then, here’s to an enjoyable evening with a new-found friend.”

Like Loading...
Written by Rorey and edited by Shay and yours truly.
I can see it in your eyes,
You want this as much as I do.

My desire,
Is to take us higher, two bodies in carnal lust,
Friction eliminated, love emancipated,
Two souls moving as one.

This is love, beneath the stars, just you and I,
Devouring and lusting in each others arms,
As we explore each other’s body and neglect our minds.

Time is of the essence,
Lest we get caught….up in time.

Our union defies the law of what’s legal,
So let’s make it official,
Pretend, if only for a moment,
That we stood before a priest,
That we have your father’s blessing,
That you wore a white dress,
With black lacy underwear,
For my eyes only,
That your hand and heart is mine.

Let’s consummate this union behind closed doors,
Where no one but God can judge.
I pray, that He forgives us….
Forgives me…despite the fact that I’m going to make you scream my name.
I pray He forgives me, forgives us for giving into this sin,
As you grip my inches of pleasure as we engage….

Let’s meet at six past nine,
Ignore the missionary as we take love from behind,
Succumbing to each other, gripping, riding, sucking,
Our bodies entwined in lust.

Tonight I want you more than ever,
And by the end of it all, amorous sounds of pleasure will be echoing these walls,
As we climax,
Scream,
Love…